An ill-fated solo hiking trip in the Albanian Alps, documented by selfies

After five weeks of moving between metropolitan centers of Europe, I was seeking a change of scenery and a new adventure. A friend suggested that we take on the Peaks of the Balkans, a multinational hiking trail that traverses the mountainous border regions of Kosovo, Montenegro, and Albania. My friend ended up backing out on the 2-week endeavor due to lack of time and funds, but I was already set on it. I geared up to go solo. I knew the best season for the hike would be midsummer, but weather reports during my initial planning showed that spring had arrived in the Balkans. I expected blustery, yet tolerable conditions among the high peaks of this range, known as the Albanian Alps.

The mountains here have been known by another name since ancient times: The Accursed Mountains—so called because they repeatedly thwarted invading armies’ attempts to cross. Little did I know, I was soon to join the ranks of foreigners to be defeated by the formidable natural forces of these mountains.

Before leaving the USA, I had not planned specifically to camp in alpine conditions, so I came to Europe armed with only a sleeping bag, borrowed jacket and hiking boots, and a homemade bivy sack thrown hastily together with plastic painter cloth and duct tape. But of course, I know how to survive outside. I knew I’d be fine!

On 11 April, I left cold and cloudy Northern Europe for sunny springtime in the Balkans…

I jolt from my nap by the plane touching down, but looking out the window startles me even more—snow. I could have sworn this plane was flying south, but sure enough, here I am in Kosovo, less than 200 kilometers from the Mediterranean Sea, and there’s snow on the ground.

I guess I had lured the bad weather with me. Pristina got snow and rain for basically a whole week around the time of my arrival.

Nonetheless, I have to find my way into town. But first, lemme take a selfie:

Once in the city center, I meet up with my Couchsurfing host Shpetim and his friends. I decide to hang out with them in Pristina for one extra day and wait on the weather to improve… So really, to sit around drinking beer while snow in the mountains gets deeper. At the bar, the night before I leave Pristina, we all joke about how I plan for being gone 10 days on the trail, but will probably give up and come back after one day

Seriously though, I didn’t come all this way to not even try, so my pack and I board a bus the next morning for Peja: gateway to the Accursed Mountains. I then wander around in the rain until I find the tourist information office, which is closed, of course. Luckily they are just out for lunch, so I take a selfie on the pedestrian street, then wait near the tourist office, out of the rain in front of a hotel. Sitting on my pack, decked out in hiking boots, bright red cargo pants, green rain jacket, and green toboggan—warranting lots of weird looks.

In the office, I am able to purchase a real map to replace my handmade ones (don’t ask). I figure the 10€ will ultimately be worth it. I also obtain the schedule for minibuses that run from Peja twice daily to the mountains via Rugova Gorge. Back near the bus station, I waive down the afternoon minibus, and am greeted on board by the energetic smiles of the driver and a guy with no teeth, who I guess is acting as copilot and in-flight entertainment for the handful of passengers, who all enjoy his high-volume jokes that I can’t understand a word of.

I get dropped off at the intersection beginning the first leg of my hike—the road to Reke e Allages. It’s still raining a bit, but I am thoroughly stoked nonetheless. This is it. The Peaks of the Balkans Trail! But first, wait, lemme take a selfie.

As I ascend the gravel road, the jagged hills on either side get progressively snowier, and by the time I reach Reke, I am trudging through a muddy slush. I stop to double check my directions with two local guys who are moving firewood. From their broken English and hand gestures, I gather that further up, the road runs out and the snow is knee deep. They advise me to turn around and take a more direct route to the next village, staying at lower elevation.

Because it is already 4pm by now and I need to make a strong start on the trail, I decide to back track all the way to the main road and intercept the trail at a further point.

I follow the main road to the village of Drelaj, where a short, steep, gravel road winds past modest houses, shepard huts, a tiny mosque, and into the mouth of a narrow minigorge. The ascent through this gorge is not steep, but sustained. I am hiking in tire tracks from a few days before, since trodden by a few sets of footprints. I assume these to be from locals walking between villages, because no hiker in their right mind would be out here in these conditions.

As I go, the gorge gets narrower, the light gets dimmer, and of course, the snow gets deeper. I surpass 1200 meters elevation. I can’t expect to make it to the next village today, so plan on setting camp wherever I end up by dark.

I get into “the zone” hiking—determined to put miles behind me, not paying enough attention to my dwindling daylight. By the time I stop for camp, darkness is falling fast, and the sleet starts falling harder. Perfect.

I hastily dig a coffin-sized hole in the knee-deep snow, throw down my sleeping bags, and crawl into my plastic. By the time I realize my bivy isn’t sealed or ventilated properly, fixing it would require crawling back outside into the wet and cold. My pants, boots, and jacket are already wet so I leave them outside, knowing they will be soaked in the morning, but better to keep dry things dry, right? I elect to use my spare plastic as an extra condensation barrier inside the bivy. Futile.

I nibble a quick dinner of trail mix and seed bread inside my makeshift body bag, then hunker down for the night and hope for the best. I can hear the drops pelting my plastic, and I already feel condensation dampening the inside.

Screw this. I’m not taking a selfie.

I manage to sleep some, but keep waking up after only a few hours, feeling significantly more wet each time. Water has crept underneath the plastic and soaked through to my hips. The second time I wake up, it’s all the way up my left side. By 3am, I am officially wet and cold. I know my only option now is to break camp and keep moving, so I pack up quickly in the continual sleet, putting on wet clothes and shivering. I ascend toward the next village by headlamp.

My maps and trail descriptions turn out to be quite ambiguous, and route finding in the dark, in the snow, ends up giving me some trouble. I can still follow in footpaths, probably of locals and livestock walking between fields. I find several dead-end horse trails before finally figuring out which direction I actually need to go, but of course, this trail meanders through the forest and is untracked—impossible to follow in this much snow.

So I am left with no choice but to backtrack all the way through the same gorge. As the sun is coming up, I finally reach the bus stop on the main road, but as soon I stop walking, hypothermia sets in with vengeance.

Even if I felt like taking selfies through all this, my camera flash doesn’t work, so my misery will have to be left up to the imagination.

I know the minibus will come around 7:30am, but now is only 6am. I figure I can surely hitch a ride to beat the bus, but I am wrong. One and half hours of standing, singing, dancing, and jumping jacks to keep warm in the bus stop which, luckily, is sheltered from the sleet—still coming down.

Finally, the bus! The heat inside feels so good.

Back in Peja, I get on the first bus for Pristina. I know when to cut my losses, and now is the time.

As I’m walking through town with my sloppy backpack and clothes still soaking wet, I run into a friend who had been at the bar with me two nights before. She sees me coming across the street and immediately bursts out laughing. Our bar bet had been spot on. The Accursed Mountains had won once again. 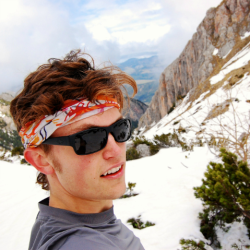 Jesse Weber
Head of Everything at Unweary Traveler

Video: Smashing Records in the Adirondacks

Hey Instagram here’s me in my underwear at a mou

Im still staying close to home, but itching to get

Is anybody still into planking?? Let’s bring it

I wanted there to be no laws, but I wasn’t drink

Want custom content for your site, or want help building your brand and getting found online? We do that! Through our creation and marketing agency, Unweary Media, we are now giving free consultations, so let’s chat! UnwearyMedia.com